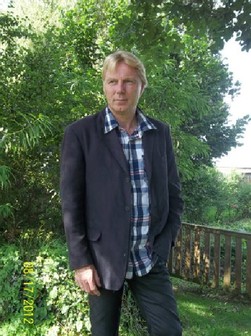 Lubertus Leutscher (b.1960) began his musical education at the age of eight with trumpet and piano. His musical talent did not go unnoticed mainly due to the many prizes that he won at music festivals and competitions both at home and abroad.

At the remarkably young age of fourteen, he began his preliminary training at the Prince Claus Conservatoire in Groningen after which he continued his principle study of the trumpet with Freddy Grin (Royal Concertgebouw Orchestra) and piano with Gerardus van der Deijl. During this period he not only played in the National Fanfare orchestra but also in the Dutch Junior National football team which left him having to make a choice between a career either in music or in football.
After he had decided that his choice was to be music, Lubertus Leutscher’s professional career began in 1978 at the age of eighteen as a trumpet player in the Frysk Orchestra followed by the “Royal Concertgebouw Orchestra” and since 1981 the “North Netherlands Symphony Orchestra” . He has played under many famous conductors including Bernard Haitink, Antal Dorati, Nicholas Harnoncourt, Jean Fournet, Hans Vonk, Edo de Waart en Kiril Kondraschin.
As soloist he has performed many times in Germany, Norway and Switzerland as well as appearing on various TV and radio programs.

At the beginning of the 1990’s Lubertus Leutscher and organist Euwe de Jong released their first CD under the title “La trompette Triomphale” which features works by Jean Langlais. From 1980 until 1991 Lubertus Leutscher taught at the Groningen Institute of Further Education, the Groningen City Music School as well as the School of Music, Dance and Theatre in Veendam.

Lubertus Leutscher studied conducting with the renowned Dutch conductor Anton Kersjes. However it was the intense collaboration with the Russian violinist and conductor Viktor Lieberman that provided him with the artistic impulse and inspiration to take up conducting seriously.

He began his career as a conductor directing brass bands, wind bands and brass ensembles including the Magnus Ensemble and Magnus Choir.

In 1997 Lubertus Leutscher was highly acclaimed at the Grahamstown Festival in South Africa where he conducted the North Netherlands Wind Ensemble, which lead to an invitation to conduct the KwaZulu-Natal Philharmonic Orchestra.

In 1999 Lubertus Leutscher’s conducting career continued to gain momentum when he conducted The North Netherlands Wind Ensemble as well as the string ensemble the Groningen Sinfonietta during the “Twelve City” series of concerts under the auspices of the North Netherlands Symphony Orchestra. In 2001 he again took his place on the rostrum to conduct a special symphonic homage to the famous “Gronings” folk singer Ede Staal.

Lubertus Leutscher has in recent years regularly appeared as guest conductor with the “Bochumer Symphoniker” in Germany and “The Gelderland Symphony Orchestra” in the Netherlands and is also chief conductor of the “ Youth Symphony Orchestra of Drenthe”.

Lubertus Leutscher became chief conductor of the Hineni Symphony in 2006. This orchestra made a successful tour of Israel in 2007 where a DVD was made in the famous Henry Crown Symphony Hall in Jerusalem that includes works by Andriessen, Verhulst and Mendelsohn. In 2009 the CD “Musica Festoso” was released which features works by Elgar, Barber, Shostakovitch and Khachaturian performed by the Hineni Symphony Orchestra.

In 2010 Lubertus Leutscher founded the “Veenkoloniaal Symphony Orchestra”. This orchestra consists of musicians not only from the Netherlands but also across the border in Germany.
A string ensemble from the orchestra recently performed in the theatre production “Het Geluk” based on short stories by the great Russian writer Anton Chekov.

The “Veenkoloniaal Symphony Orchestra” has recently been invited to perform at the prestigious Tivoli Festival in Copenhagen in 2013.

Lubertus Leutscher is also very much at home in the world of light music and musical theater having collaborated with many well known Dutch artists.